The main activity of TRA VISIONS 2018, a project funded by the European Commission (EC), is the development and implementation of two competitions. One is directed towards young researchers and the second towards senior researchers involved in EU projects. They take place every two years together with the TRA, the most important European conference on transport. TRA VISIONS 2018 awarded prizes to both its young and senior researcher winners at two separate ceremonies at the 2018 Transport Research Arena (TRA 2018), held from 16-19th April 2018 in Vienna, Austria.

Young researchers from all over Europe submitted innovative concepts in order to enhance smart, sustainable and integrated transport and mobility of people and goods. Overall, 169 young researchers from 56 different European universities participated in the TRA VISIONS 2018 Young Researchers Competition and submitted 122 ideas for the transport modes road, rail, waterborne and cross-modal. The prizes were awarded for this competition during the TRA2018 Opening Ceremony on Monday 16th April (12-12:30pm).

The Young Researchers Competition awarded prizes sponsored by industry (ALICE, ERTRAC, Meyer Werft, SHIFT2RAIL and UITP). In the road sector, the winners were

In the rail sector, the winners were

In the waterborne sector, the winners were

Finally, in the cross-modality sector, the winner was

The Senior Researcher winners received their prizes during the TRA2018 Gala Dinner on Tuesday 16th April. Senior researchers from all over Europe had submitted innovative concepts in order to enhance smart, sustainable and integrated transport and mobility of people and goods.  The competition received 121 entries from researchers based at 91 institutions, universities or companies. Entries were submitted for the four transport modes road, rail, waterborne and cross-modality.

Further details on the competitions, the winners and their pitches, as well as a book including the abstracts of all the project ideas submitted for evaluation to both competitions may be found at www.travisions.eu. All the video materials can be found on the TRA VISIONS YouTube channel. 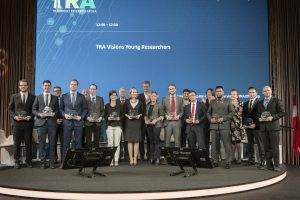